The valley of the Guadalhorce river is located to the west of Malaga the capital of the province of the same name. Alhough Malaga is known worldwide for the Costa del Sol, more and more tourists venture inland to discover the little andalusian villages of the area. The Guadalhorce Valley is the natural gateway between the coast and the villages inland. 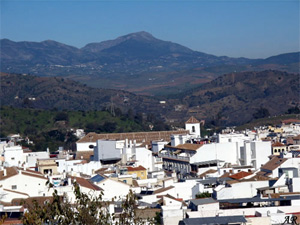 Since ancient times the fertile valley, irrigated by the Guadalhorce river, is considered the garden of Malaga. The agriculture in the area offers all kind of crops and orchards with oranges, lemons, olives etc. The region offers a rich cultural heritage with folcloric events taking place throughout the year. The beautiful landscape and the excellent climate make it a perfect destination for nature lovers or travelers who want to practice sports like walking, cycling, climbing, parapente or hiking through the different mountain ranges which surround the valley. The typical mediterranean forest appear on the mountain slopes of the valley comprising coark oaks, pinetrees wild olive trees, algarrobos and gall oaks offering the visitor a unique natural setting just a couple of miles away from the bustling Costa del Sol.

Our travel guide offers information of some of the most interesting towns to visit like Alhaurín el Grande, Coín, Álora, Cártama and Pizarra. As there is so much to see and do in the area renting a car is highly recommended.

Alhaurin El Grande is situated between the Sierra de Mijas and the much lower mountains in Cártama. The village offers spectacular views over the fertile valley full of all kind of subtropical fruit and citrus trees. During the colder winter months the snowcapped mountains of the nearby Sierra de las Nieves are clearly visible from the village.

Remains from Turdetan and Arab settlements have been found in several archeological excavations in the area although it seems more than likely that due to the silver and gold mines in the mountains nearby Alhaurin has a Phoenician origin. Alhaurin is mentioned in several historical chronicles from the Romans and must have been an important settlement in Roman times. 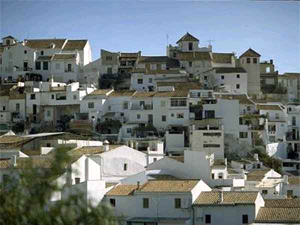 Coín is separated from the Costa del Sol by the Alpujata mountain range. The landscape of Coín is dominated by gardens and orchards, especially near the river Grande or the Guadalhorce. The first human settlements found near Ardite, Llano de la Virgen or Cerro Carranque in the fertile valley date back to the Palaeolithic. During the Muslim era, when the actual foundation of the city took place, the agriculture was especially important. Like in other places in Andalusia which were founded by the Arabs some remains of the ancient irrigation infrastructure are still pretty well preserved.

Cartama is situated at the foot of the Sierra de Cártama. Like all other towns of the valley due to the abundance of water the surroundings of the village are full of citrus orchards and fields full of all kind of crops.

A visit to the chapel of the patron saint of Cártama, Nuestra Señora de los Remedios, and the ruins of the castle just behind it should not be missed. From the remains of the castle one can enjoy some of the best panoramic views of the village and the valley of the Guadalhorce.

On the hill of Gibralmora there are remains of what probably has been an Arab watchtower. From the Raja Ancha Park in the center of Pizarra a trail departs leading through the narrow ravine up the hill to the statue of the Sagrado Corazón de Jesús. 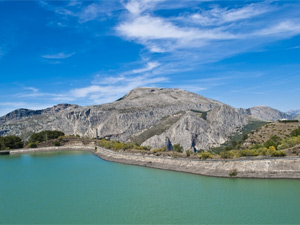 Álora, a fortified viewpoint near the Sierra de Huma near and the Guadalhorce river offers some of the most diverse landscapes of the province of Malaga.

The castle on the top of the hill, which is of Phoenician origin, but completed by the Romans has granted the village the surname of 'la bien cercada', which means securely fenced. The fortification was modified by the Vandals and besieged on numerous occasions by the Christian during the Muslim era.

A stroll uphill through the winding streets of the old town is a joy for the eyes, but can be a bit tiresome, so one might consider to drive to the castle for a visit. The convent of Nuestra Señora de las Flores is also worth a visit. It was constructed in the 17th century and is located approximately 2 kilometers from Álora.

Other interesting places to visit which are all within easy reach by car are the nearby lakes Conde de Guadalhorce and Guadalteba, the natural park in Ardales, the Garganta del Chorro, the spa in Carratraca, el Valle del Abdalajis, the dolmen in Antequera or El Torcal de Antequera.

Finca Santa Margarita is situated less than half an hour by car from Malaga airport in the Guadalhorce valley.

Enjoy your holidays in Tenerife with a rent a car

The lowest prices for car hire in Valencia

Compare car hire prices in Majorca with one click

Take advantage of our car hire offers in Faro