Los Alcornocales Natural Park is located in Andalusia in the south of Spain.

The Parque Natural Los Alcornocales occupies a vast territory full of Mediterranean native forest, cork oak tree groves and meadows called dehesas. From the seventeen villages and towns which form part of the natural park only one forms part of the province of Malaga, all others belong to the province of Cadiz, because the territory is shared amongst both provinces.

Since prehistoric times this part of Andalusia has been inhabited by humans. Some remnants found in excavations even date back to the time of the Neanderthals and the Bronze Age. In most of the caves discovered so far Paleolithic and Neolithic paintings have been found. 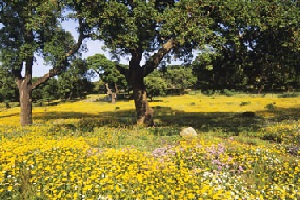 More recently the area was dominated by different cultures and civilizations: Phoenicians, Iberians, the Roman Empire and the Arabs which stayed in the area for more than a millennium after crossing the Strait of Gibraltar, all left their footprints here. During the domination of the Kingdom of Granada many of the villages which comprise the Natural Park today reached were important economic and cultural centers. This Muslim heritage can still be admired in the architecture and the outlines of the famous white village (Pueblos Blancos) of Cadiz.

Today the human activity in Los Alcornocales is mainly dedicated to the production of cork and the exploitation of other natural resources the forest offers like hunting, the collection of medicinal plants and other species like mushrooms, or agriculture.

Over the last decades the number or tourists venturing inland has increased the number of hotels in Los Alcornocales. Most of them are small family run hotels with the typical Andalusian charm.

The extensive cork forests of the Los Alcornocales Natural Park are amongst the largest in the world. Other species which can be found in the park are wild olive trees, rhodondendrons, algarrobos and pine trees.

The climate of this region in Andalusia is typical Mediterranean, but the temperatures are relatively mild, because of the proximity to the Mediterranean Sea. Its close proximity to the sea helps keep the temperature relatively mild all year long. The Levante winds from the west bring a lot of rain compared to other areas in southern Spain. Like the nearby Grazalema nature reserve Los Alcornocales receive an unusually high average rainfall from clouds and fogs penetrating from the Atlantic Ocean.

The main information office of the Alcornocales Natural Park is located in Alcalá de los Gazules, a typical Andalusian village with whitewashed walls and small streets along the A381 road from Los Barrios to Jerez. Unlike the Costa del Sol the inland of Andalusia offers less choice of accommodation and most villages only have a handful of smaller hotels or pensions where to stay. 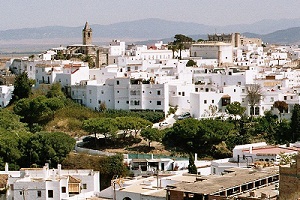 The village of Benalup to the south of Alcalá is famous for the Cuevas del Tajo de las Figueras, a cave with tombs and paintings from the Neolithic period.

Jimena de la Frontera is located approximately 35 kilometers inland. The center of the village with its cobbled streets and typical Andalusian architecture with a clear Moorish influence has been carefully preserved. The view of the surrounding countryside from the vantage point of the Moorish castle is simply breathtaking.

One of the most attractive villages of the area is Vejer de la Frontera. Perched high above the river Barbate it is pretty clear why the Arabs choose the location as it is the perfect vantage point to control the area. All around the village we find Andalusian patios full of flowers and charming little squares connected by winding cobbled streets. Without a doubt the Plaza de España with its fountain and palm trees is one of the most beautiful town squares in the province. In the old walled town of Vejer parking can be difficult so it is best to leave your car outside the Arco de la Villa. 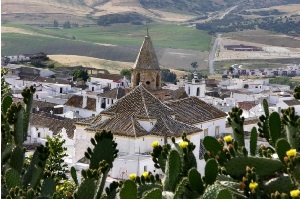 Medina Sidonia, a medieval village is situated to the north of Vejer de la Frontera. Despite of its importance in the history of Spain it is a fairly unknown village. This may be one of the reasons why it has managed to retain a mayor part of its medieval architecture.

Due to the diversity of the Natural Park all kind of activities are offered like walking, hiking or climbing. Other outdoor activities which can be practised in the area are horse riding, cycling, canoeing, hunting and fishing.

Watersport lovers will find plenty of possibilities to practice scuba diving, sailing or kite surfing on the Atlantic Ocean in Conil de la Frontera or Tarifa, which are only a short drive away from the Los Alcornocales Natural Park. The area is also a paradise for nature lovers and birdwatchers, with the Strait of Gibraltar as one of the most important observations point on the migrations routes from Europe to Africa and eighteen different species of birds of prey. The nearest airports can be found in Jerez de la Frontera in the province of Cadiz and Malaga on the Costa del Sol.

The Fairplay Golf Hotel is situated between Medina-Sidonia and Vejer de la Frontera in the Andalusian province of Cadiz, in southern Spain.

The rural hotel San Jorge is located right in the heart of the andalusian province of Cadiz in Andalusia.

The holiday accommodation Casa Barbara is a great choice for tourists who love outdoor activities.

Hire a car in Barcelona at the lowest price online

Compare car hire prices in Pisa with one click

Compare car hire prices in Murcia with one click

Rent a car in Lanzarote and take advantage of our discounts

The cheapest car hire in Minorca without the small print

Book your car hire online for a perfect holiday in Tenerife

276 customers rated our services in Jerez with an average score of 8.1 out of 10 points.