The Costa del Sol is a favorite holiday destination amongst tourist from all over the world. One of the main reasons is the all year round mild Mediterranean climate, the beautiful beaches and the varied leisure possibilities in the resorts along the coast.

But the Costa del Sol is more than sun and beaches. Tourists traveling inland for the first time are amazed by the beautiful landscapes which can be found here. This is no wonder, because Malaga and bordering provinces like Cadiz, Seville, Cordoba or Granada offer a large number of national parks and nature reserves which make it an excellent destination for nature lovers, bird watchers, hikers and all kind of outdoor activities. 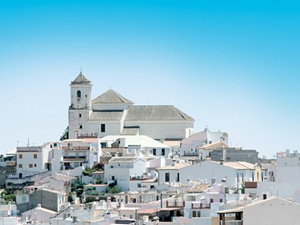 Our first stop on the way to the park is Mijas, a little whitewashed village at the foot of the Sierra de Mijas mountains. Mijas is a well conserved typical Andalusian village with narrow winding streets, small squares, beautiful gardens and monuments and remains from ancient times. Because the village is only 8 kilometers away from the busy Costa del Sol it is a favorite daytrip for tourist staying in Torremolinos, Benalmadena, Fuengirola or Marbella. In contrast to other Andalusian villages which we can visit on the way it is much more touristic with a tourist information office and many souvenir shops, bars and restaurants.

After leaving Mijas we travel inland along the A-387. This narrow winding road offers breathtaking views of the coastline. On bright days it is even possible to see the African coast and the Rock of Gibraltar. At the big roundabout near the Mijas-Alhaurin Golf course we continue along the MA-485 towards the little town of Coin where we take the A-366 towards Alozaina, the first of the nine village which form part of the Sierra de las Nieves reserve. 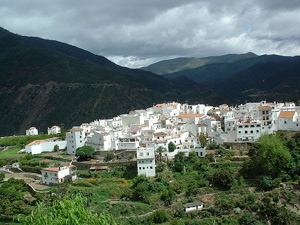 Alozaina is located at 386 metres above sea level between the Ronda mountains and the valley of the Guadalhorce river. The village is surrounded by fruit orchards and olive groves and fields full of crops. The difference between both regions are the reason behind the remarkable scenic diversity of the surroundings of Alozaina. The rolling hills of the Sierra Prieta, whose summit reaches and altitude of 1,525 metres above sea level, are considered the most spectacular views of Alozaina. There are several hiking trails in Alozaina, like the Cuesta de Pino Alta. Most of the tracks offer splendid views of the Guadalhorce valley and the surrounding mountain range.

El Burgo lies at almost 600 meters above sea level next to the Turon river and is one of the main gateways to the Ronda highlands. The village formed part of the villages in Al-Andalus which sublevated against the Caliphate of Cordoba during the Muslim era. The Atalaya de Cornicabra watchtower was built at that time and was amongst the most important defensive points of Omar Ben Hafsun. 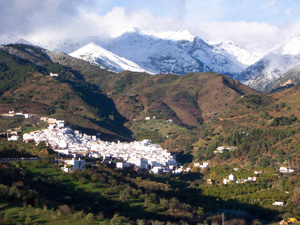 Tolox is situated at the foot of the Pico de Torecilla, the highest mountain of the Sierra de la Nieves. Especially in the winter months, when the mountain range is occasionally covered with snow, the scenery is spectacular. The village was practically unpopulated after the expulsion of the Muslims by the Catholic Kings in 1485. Tolox is a village with a strong Arab character, with narrow winding streets and white painted houses. Tolox is well known for its curative waters that are especially recommended for asthma and bronchitis. The Balneario de Fuente Amargosa is open from May until October.

Casarabonela is one of the villages of the Biosphere Reserve that best preserves the traditional Andalusian atmosphere. The man made terraces which surround the village are full of fruit trees and vegetables.There are remnants of the old Roman roads that linked Ronda with Casarabonela although it has never been proven, that the village was founded by the Romans. The old roman fortress was reinforced by the Arabs in such a way, that it was the last defensive point the fall during the battles against the Christian a