The Poniente de Granada is situated in the heart of Andalusia. This fertile area has been inhabited since prehistoric times by the Iberians. The region was invaded by Phoenicians and Romans before the Moors reigned Al Andalus for 8th centuries.

It is a region of ancestral conditions, charming villages and extraordinary natural beauty with historical cities like Seville and Cordoba nearby. Nowadays the ancient frontier of Al Andalus of which the kingdom of Granada formed part borders with the provinces of Malaga, Cordoba and Jaen. In the layout of the villages and the local names and customs the remains of the arab legacy are still evident.

Moorish and Christian watchtowers, fortresses and castles can be found throughout the area, because the Poniente de Granada was the scene of many battles between Moors and Christians during the conquest by the Catholic Kings. Between olive groves, lush valleys and gentle rolling hills small white villages appear surrounded by mountain ranges such as the Sierra Nevada and the Sierra de Tejeda, Almijara and Alhama. 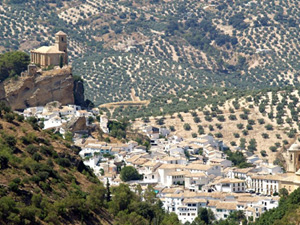 The white village of Montefrio lies to the west of Granada in a landscape made up of olive trees and hills. Montefrio enjoys one of the most striking settings of the Poniente. The remains of the arab fortress and the church from the 16th century are well known landmarks of this little spainish town with its whited-washed houses.

About seven kilometers from Montefrío, on the road to Illora, the Penas de los Gitanos, an archealogical site with remains from Neolithic times should not be missed.

The city of Alhama de Granada, located on the edge of a spectacular ravine is a place full of history. The old arab baths of Alhama, in the outskirts of the village, were constructed during the moorish kingdom of Granada, but were lost to the Christians during the 'Reconquista'. The hot springs of Roman origin are still recommended in many therapeutic treatments.

The little village of Zafarraya is situated on the border of the province of Malaga, on a high plain towards the Sierra de Almijara. The area is very fertile and fields full of crops and wheat can be seen everywhere. 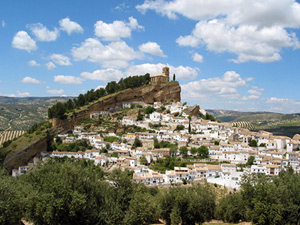 Since Neolithic times the village of Moclín has been a human settlement. The most interesting landmarks, apart from the Anthropological Museum with information about the history of the region are the Sanctuary of Cristo del Paño built after the reconquest and the Nazari castle from arab times.

Loja, the biggest town in the Poniente Granadino, is located further west towards the mountains of the province of Cordoba. The many convents palaces and churches are silent witnesses of the great history of Loja. Los Infiernos de Loja is a spectacular geological formation near Loja.

Some of the towns and villages in the region are also situated on the Route of Washington Irving. This is a historical track which links the city of Granada with Malaga and Seville.

El Poniente is an ideal holiday destination. Outdoor and nature lovers can enjoy a wealth of activities like hiking the many trails of the surrounding mountain ranges, horse riding, cycling or bird watching. It is also the perfect place for lovers of culture and history with some of the most beautiful cities of Andalusia just a short drive away.

Caseria is located to the west of Granada, in the valley of Huétor Tájar and just 25 minutes from the airport.

Hotel La Enrea is situated in the picturesque village of Montefrío. It has 19 rooms with spectacular views of the little village.

Cortijo El Morrón is the ideal starting point for excursions to Granada, Córdoba or Málaga, because it is situated in the center of Andalusia.

El Molinillo is situated in a little hamlet not far from Alhama de Granada.

Book a rental car at Nice airport at the best price

The lowest prices for car hire in Tenerife

Looking for the cheapest car hire in Faro?

Rent a car in Pisa for an unforgettable holiday

Book a rental car in Majorca at the best price

84 customers rated our services in Granada with an average score of 8.3 out of 10 points.