El Torcal de Antequera is located approximately thirty kilometers north of Malaga and to the south of village of Antequera.

This nature reserve of some seventeen square kilometers in the mountain range the Sierra del Torcal is worldwide known for its unusual limestone formations and considered one of the most beautiful karst landscapes in Europe.

From Villanueva de la Concepción tourists can access the information center next to the car park. For hikers this is also a good starting point to walk along one of the three hiking trails of el Torcal. Along these trails visitors can enjoy beautiful views of the area and even the coastline of Africa on a bright day. Although the different routes do not have a great difficulty as far as walking is considered it is advisable to wear boots or decent walking shoes. Do not forget a bottle of water if your visit takes place during the warm months of the year. 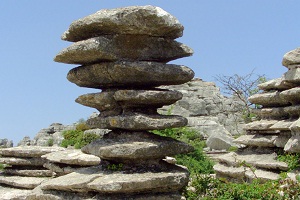 Visitors will be impressed by the impressive mixture of wildflowers and orchids, of which some thirty different varieties can be found in el Torcal. The park is also home to several species of reptiles, some of them endemic to this nature reserve in Andalusia.

El Torcal de Antequera is considered a paradise for birdwatchers in southern Spain. It is also possible to see mountain goats, but most other mammals of the area, like rodents, badgers and weasels are nocturnal and more difficult to spot. The best period to visit el Torcal is spring or fall. Like in most parts of the province of Malaga during the summer months it can get extremely hot.

The Torcal natural park like many other limestone formations in Europe includes several caves of historical importance, some of them dating back to the Neolithic like the Cueva del Toro. 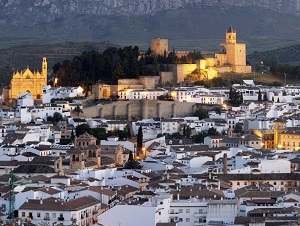 Antequera is a pretty monumental town only 40 minutes by car from Malaga. One of the first visible landmarks coming from the Costa del Sol is the Peña de los Enamorados, a rock with a Romeo and Julieta like legend.

Depending on the season you visit Andalucía the fields and plains surrounding Antequera offer all kinds of colours. The city itself offers a wealth of monuments and architectural treasures practically round every corner. Apart from the cultural monuments the city also offers the dolmens of Viera, Menga and Romeral, which are burial structures erected in the Bronze Age which are amongst the finest archeological treasures of southern Spain.

Antequera is located at a natural crossroads between the towns on the coast and important cities in eastern and western Andalusia like Cádiz, Jerez, Seville, Granada and Cordoba. It is no wonder that many different civilisations like Tartessians, Phoenicians, Iberians, Carthaginians, Romans and Arabs all have left their footprints here.

Antequera has so much to offer, that it is practically impossible to see all it has to offer in just one day. However all monuments and places to visit are concentrated in the historical center of the town, so just park your car and go on foot. 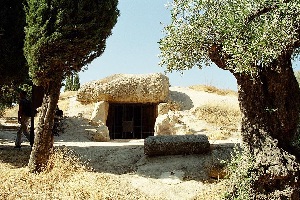 On your tour of the monuments of the city The San Sebastián Plaza with its Renaissance fountain is not to be missed. The Colegiata de San Sebastián, the Encarnación convent and the Descalzas Convent are other monumental sights worthwhile visiting.

From the Gate of Granada (Puerta de Granada) it is just a short walk to burial constructions of the Dolmens of Menga and Viera. Do not miss the Palacio de los Marqueses de la Peña de los Enamorados with its Moorish-Renaissance façade and the Alcazaba, the Arab fortification on the highest point of the village from which one can enjoy the best panoramic view of Antequeara and its countryside.

Archidona is situated to the east of Anteqeura some 50 kilometers from Malaga airport in the north-eastern part of the province. Its strategic location as a natural watchtower on the ancient trails which connected the cities of Granada, Malaga, Cordoba and Seville made it the perfect place to found the village. The Phoenicians started the construction of the fortified city walls which were later improved and extended by Romans and Muslims.

During the Arab Medina Arxiduna became one the most important cities in Andalusia and witnessed an era of great expansion. The town lived through some turbulent years during the uprising headed by Umar ibn Hafsun a Christian leader in southern Spain in the 9th century who was based in Bobastro, until they finally came under the government of the Emirate of Granada, also known as the Nashrid kingdom. 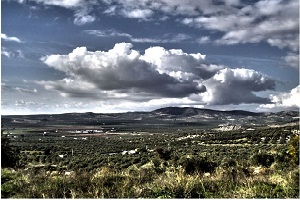 The construction of the old medieval fortress of Archidona was started by the Arabs in the 9th century. The castle consisted originally of three defense belts. From the fortified walls of the castle one can enjoy the best views of Archidona and the surrounding countryside.

Other important monuments in Archidona are the Las Mínimas convent, the Nuestra Señora de Gracia hermitage or the Santo Domingo convent, nowadays converted into a hospitality management school. The Plaza Ochavada, with its original octagonal design, is another well known landmark of Archidona.

Other typical Andalusian towns and villages you can visit on your tour to the Torcal de Antequera are Almogía, Casabermeja, Villanueva del Rosario and Villanueva del Trabuco. This village in Malaga is famous amongst hikers for the trail known as fuente de 100 caños, the union of the two smaller streams that flow down from the hills and constitute the source of the river Guadalhorce.

Finca La Campana is situated in El Chorro, one of the most famous climbing destinations in the world, only 60 kilometers by car from the airport of Malaga on the Costa del Sol.

Cortijo Galvan is situated in the heart of Andalusia almost halfway between Granada and Malaga and not far from el Torcal de Antequera.

Casas rurales El Canal is situated only 10 minutes from the city of Antequera the Torcal de Antequera Natural Park.

Hotel Coso Viejo is situated in the historical center of the city and just a short walk from the Alcazaba.

Hire a car at Faro airport at the lowest price online

Save up to 20% on your car hire in Barcelona

Take advantage of our car hire offers in Lanzarote